Yes, I realize this is highly unlikely and it’s incredibly niche. But if you don’t ask, you’ll never know.

We’re using Codefresh for our CI/CD and a large part of the pipelines are running bash commands.

Each of those entries is one (or more) bash commands. Since it’s yaml, you can do ‘- |’ and dump a whole script in there.

That’s similar to GitHub actions and Travis CI yaml files.
I’ve been planning to look into automatically injecting Bash into yaml files. Can you point me to some documentation on the file naming conventions or about the best way to detect, that it’s a Codefresh yaml file? (sorry, I’ve never used Codefresh so far)

I experimented a bit with this.
It’s possible to inject Bash in a way, so that all lines of a commands block share the same set of variables. This enables rename and code completion across lines.

The problem with Codefresh files is, that there’s no good way to identify them, unless when it’s a codefresh.yml file. It would be possible to support comments like # type=codefresh, unless there’s no better or widely used way to define this.

I can’t promise yet that this will make it into a release. If it’s released, then it’ll be the next major version. 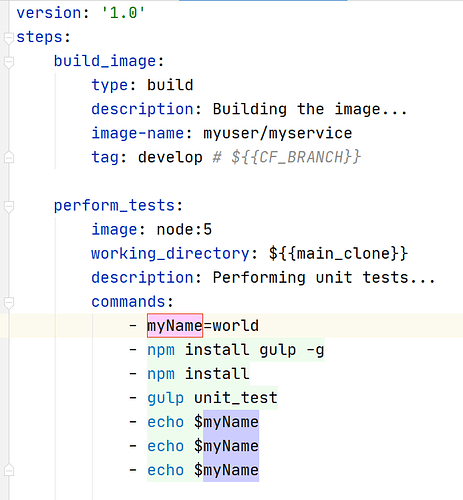 If it happens at all I’d be thrilled. Your comment idea seems perfect to me. You can have a different comment for each supported yaml file. Regardless thanks for even considering it.